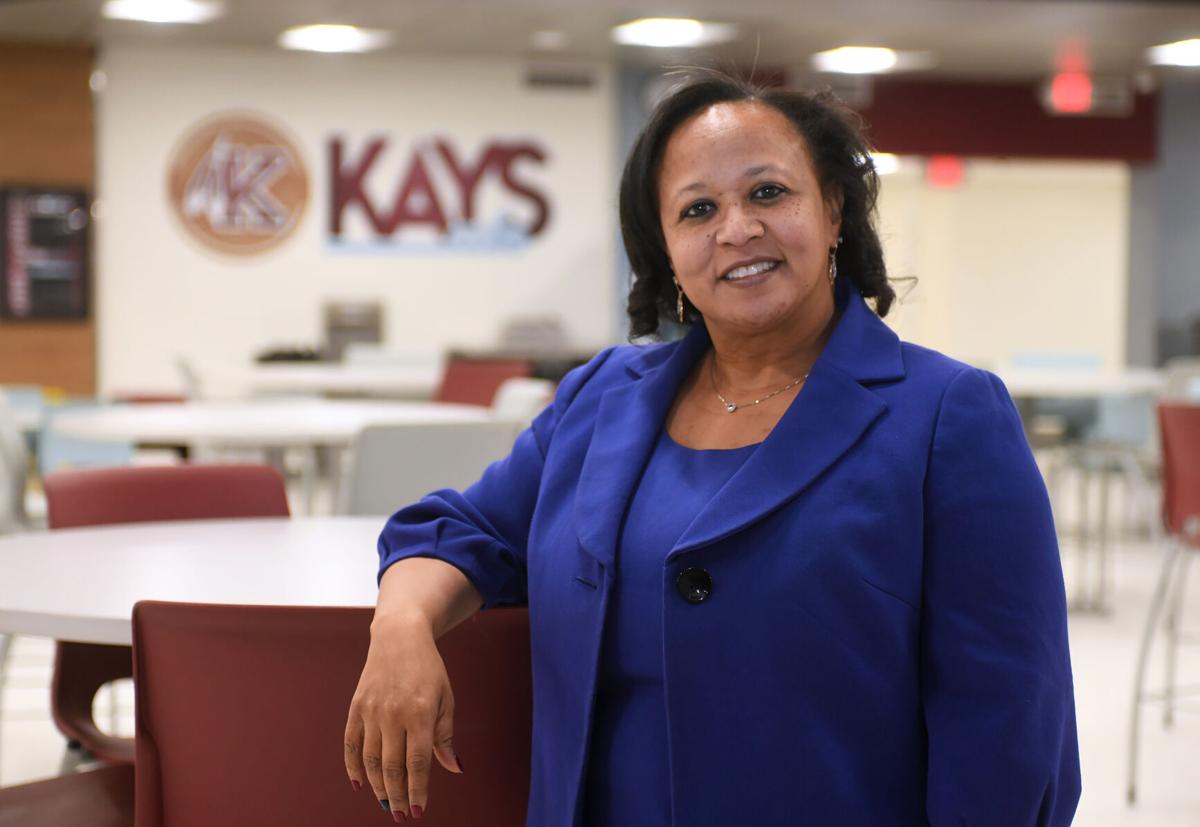 Kankakee School District Superintendent Genevra Walters stands for a portrait in the cafeteria at Kankakee High School last week. Walters has been named one of the Daily Journal’s Citizens of the Year. 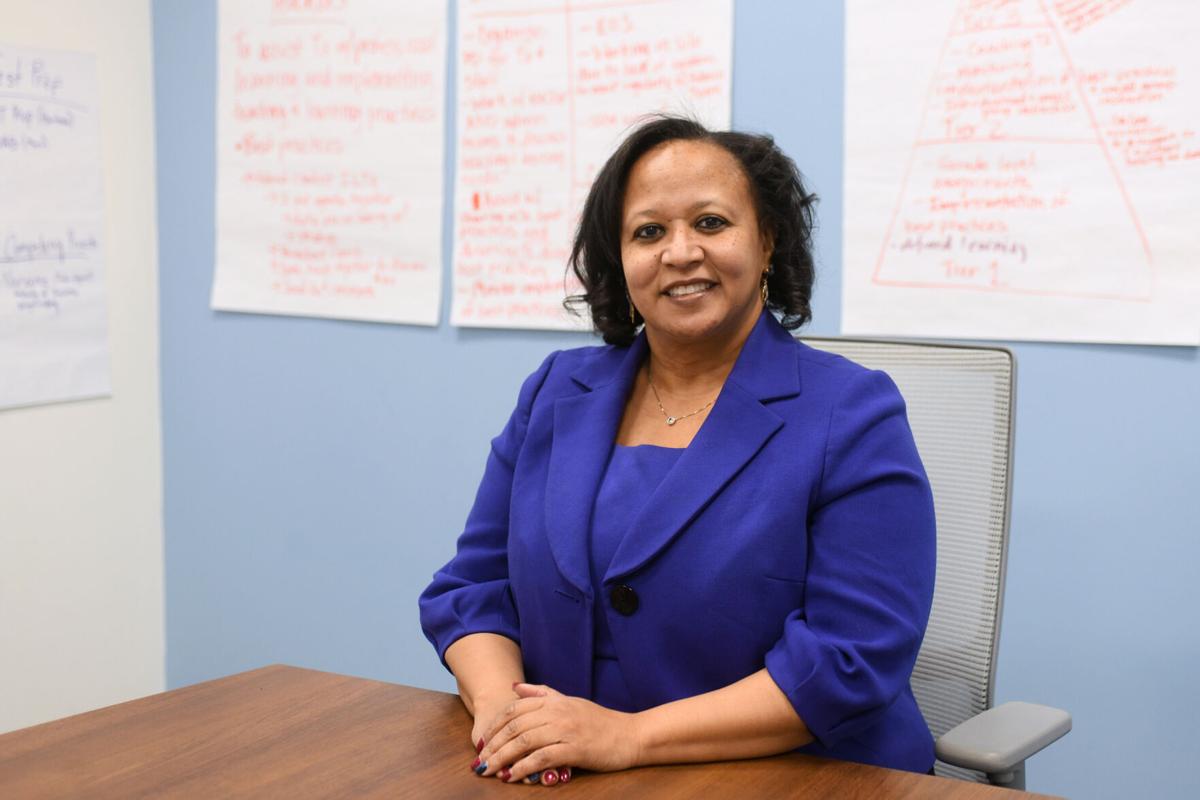 Kankakee School District superintendent Genevra Walters sits for a portrait in the conference room at Kankakee High School last week. Walters has been named one of the Daily Journal’s Citizens of the Year. READ MORE.

In the initial days of the pandemic, the idea that children would not be returning to school for the final months of the 2019-20 school year was unfathomable for many people.

As superintendent of the largest school district in Kankakee County, Genevra Walters heeded the signs early on that something drastic was about to happen in the world of education. She got busy planning for a school year like no other.

During an unprecedented year for schools, Walters was not only zeroed in on her duties at Kankakee School District 111.

She has also been outspoken about gun violence in the community, with particular concern for its impacts on youth.

At the same time, she has continued fostering relationships between the school district and community organizations to benefit K-12 students.

Walters’ unrelenting presence as a community leader is why the Daily Journal has named her Citizen of the Year.

Walters began her career as a social worker with KSD111 in the 1990s.

It might sound surprising, but Walters said she “never wanted to be an administrator.”

She thought she would be a professor, with her mind set on researching the social and educational experiences of underprivileged students.

When the opportunity arose for a job as assistant principal at Kankakee High School, Walters decided she would “see what happens.” A few career moves later, she returned to the district in 2014 to become superintendent.

Friends have told Walters she is “too accessible” to the community in her role as superintendent. Her response?

“I just don’t know any other way to be. I’m a social worker, so I don’t know how to pull myself away so that I don’t have those interactions with the community.”

Michael Boyd, president of Kankakee Community College, said Walters is a “visionary leader” who understands the power of education to transform communities.

Boyd added that it is inspiring for other educators to see the results of Walters’ work and leadership. For instance, Boyd was inspired to enhance learning environments at KCC after touring renovated spaces at KHS.

“This is what makes it a great place to be an educator, when you look around the community and you see forward-thinking educators and academic leaders like Dr. Walters,” he said. “As another educator, another professional in education, it makes you want to stay here.”

Scott Wakeley, superintendent of Bradley-Bourbonnais Community High School, said Walters has worked with him and other area superintendents “from day one” and has always been interested in hearing others’ perspectives.

“She is passionate about making her school district [better] and doing what’s right by kids even when it’s difficult,” Wakeley said. “We need leadership when there are no easy answers, and right now there are no easy answers. Genevra has brought a tremendous level of leadership, not only to the school district, but to the entire community of Kankakee.”

If he were to describe Walters in one word, it’d be “tenacious.”

“She just looks at things as obstacles to get through, not barriers to keep her out,” Wakeley said. “I really respect that.”

KSD111 rolled out its back-to-school plan in May, months ahead of other area districts. Students were given three options: stay on a fully remote schedule, go on a hybrid schedule or, in certain cases, they could come to school full time.

Walters has said from the beginning that, even once the pandemic is in the rearview mirror, school as everyone knew it wouldn’t be the same — and that is for the best.

For some students and families, the flexibility of hybrid and remote learning options works better than the previous system, she said.

“I think the key to designing what happens post-pandemic is to not create a one-size-fits-all school system. It’s to figure out how we can be flexible and create a system that takes into consideration family dynamics without hurting any other group of kids,” Walters said.

When news of the coronavirus first started to circulate, it didn’t take long for Walters to conclude that a stay-at-home order was coming and schools would be affected.

“The one thing I found out [about the 1918 pandemic] was it wasn’t over in six to nine months,” Walters said. “Once I saw that, it was clear to me that we were going to be in this for at least the next school year.”

Walters said she feels the district’s planning, while not perfect, went as well as it did because of “constant communication” with administrators and the teachers union.

“The moment we heard we would go to shelter-in-place, the union president Beth Anderson and I went to every school and talked to them about what was going to happen and what we predicted could happen,” Walters recalled.

Even though District 111 was more prepared than others to switch to a primarily online learning environment — it already had one-to-one technology and used an e-learning system called Learning Anywhere, Anytime — getting used to the “new normal” was tough.

Angela Shea, Kankakee School Board member, said Kankakee is lucky to have Walters, a natural problem solver with a vision for the school district.

“When COVID first started, she said here are some of the possible outcomes. Then, we planned for that,” Shea said. “She works harder than anybody I know.”

Shea said she and Walters both graduated from Kankakee High School in 1986 and got to know each other more recently since Shea became a school board member.

“I had no idea in high school all she was capable of, but I’m sure none of us did,” Shea recalled. “It’s been really fun to see it come full circle where here she is, a graduate of Kankakee High School, now back here in our school district helping make things happen for other kids.”

A VOICE IN THE COMMUNITY

Walters has voiced her concerns regarding gun violence in Kankakee during several town hall and city council meetings.

Not only has she advocated for a community-wide, comprehensive plan to address gun violence in the city, she has also offered to be part of that process.

“Gun violence is trauma that affects the family for a lifetime,” Walters said. “I would even go so far as to say within generations, especially if one particular family is experiencing a repeated impact of gun violence.”

While gun violence is not a new issue, there has been an increase in incidents involving children over the past two years, she noted.

When considering the effects of gun violence on children, Walters recalls what her son went through in kindergarten when his father died of an aneurysm.

She said she has come to understand that her son won’t ever be the same after the trauma of his father’s death, even with years of support.

“When I think about that, with his father dying of natural causes and how difficult it was for him, I can’t imagine a child losing their father to gun violence and being shot at the same time … When children are part of [gun violence] directly, they are actually physically affected by it, that’s an experience that I don’t think they will ever truly overcome.”

Despite how difficult it is to heal — both for individuals and as a community — children need systematic support so they have direction in their lives when they graduate high school, Walters said.

“I think that we all have to come together and come up with solutions that actually we can commit funds to,” she said. “I’m tired of the talking. I think we actually need to say here’s what we want to do and here’s the funding to support it and here’s the people that are going to make sure that it happens … If we can share the responsibility of supporting our youth, then I think we could help the community in the long run.”

Walters has been working in collaboration with the Kankakee County State’s Attorney’s Office and other local agencies to secure grant funds and establish a Kankakee County Youth Empowerment Program.

Walters advocated for a safe space for Kankakee County teens to ride bikes this summer after Kankakee was bombarded with youth driving unlicensed dirt bikes and ATVs on heavily trafficked city streets.

“I thought since we’re having a problem with this, let’s give kids a safe, responsible way to participate,” she said.

Another initiative Walters is proud of is the school district using grants to purchase a new food truck, called Kay’s Kitchen, to deliver school lunches to children. It’s been particularly useful for students learning remotely who are unable to come to school daily to pick up a meal.

“I was really excited about that,” she said. “I thought it was a creative way of solving a problem ‘on Mars.’”

Education: 1986 graduate of Kankakee High School; bachelor’s and master’s degrees in social work from the University of Illinois at Chicago; doctorate in special education with an emphasis in teacher education and research from Illinois State University; superintendent’s endorsement from Western Illinois University.

Hometown: Kankakee, where she has lived and worked nearly all her life.

Two recent shootings in Kankakee leads to gathering of elected officials, community activists and residents to discuss ways to curb the gun violence.

The Kankakee School Board approved bids Monday for two projects: new lighting outside all of the district’s school buildings and improvements to the Kankakee High School swimming pool.

Stephanie Markham joined the Daily Journal in February 2020 as the education reporter. She focuses on school boards as well as happenings and trends in local schools. She studied journalism at Eastern Illinois University.