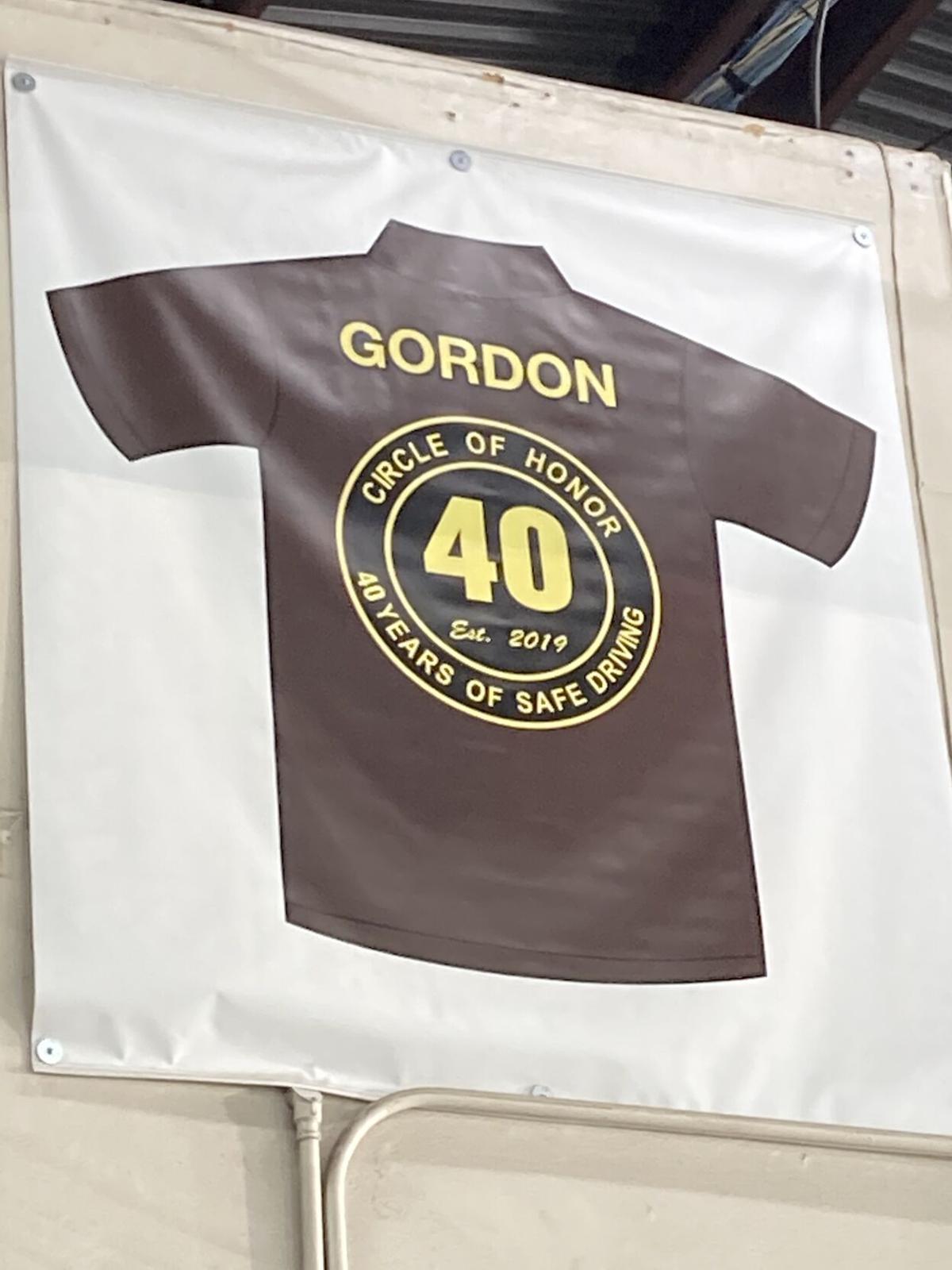 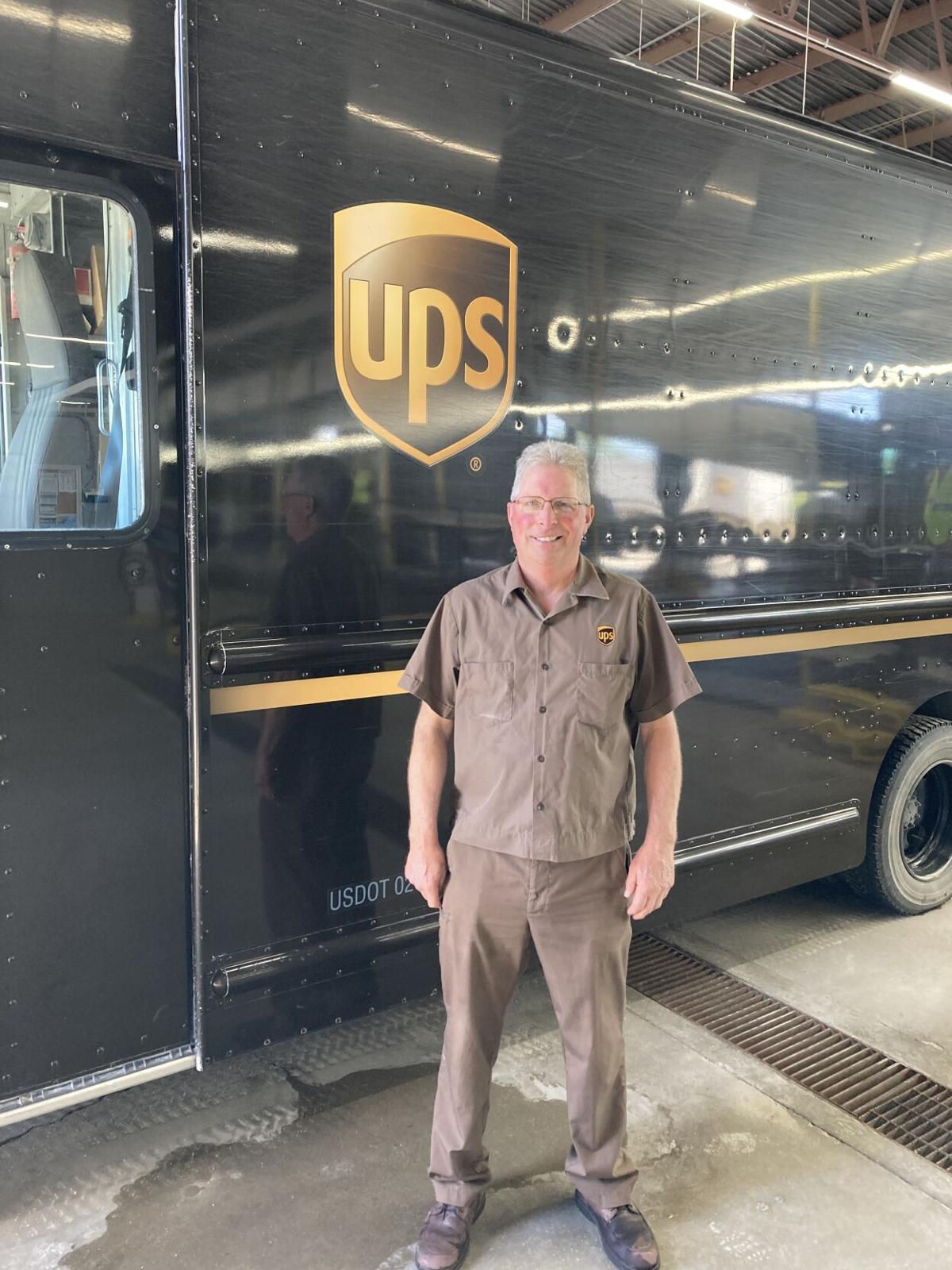 Dave Gordon, of Bourboannis, is retiring from United Parcel Service after compiling 42 years of safe driving. Below: A banner hangs in the UPS facility in Kankakee, marking Gordon’s safe driving accomplishment.

Dave Gordon, of Bourboannis, is retiring from United Parcel Service after compiling 42 years of safe driving. Below: A banner hangs in the UPS facility in Kankakee, marking Gordon’s safe driving accomplishment.

How do you accumulate 42 years of safe driving for a package delivery company? For UPS driver Dave Gordon, of Bourbonnais, the formula was quite simple.

“Well, the secret to being a safe driver is you obey all the traffic signals,” Gordon said. “You don’t run red lights. And you stop completely at all stop signs, you yield. You’re just the defensive driver. UPS trains you to be that way. You always wear your seat belt. I mean, I wear my seat belt 150 times a day. We’re required to wear them whenever the truck is moving.”

Gordon, 63, has been driving his truck across Kankakee County since the late 1970s, and he’s seen a lot, made a ton of friends with endless memories to cherish. He drove his last route for UPS on Friday, and he’ll now enjoy retirement.

“The first eight years of my career, I was a swing driver and drove everybody’s route, vacation coverage, etc,” he said. “And then eventually, I got a route out this direction. In Bradley, Bourbonnais.”

While Gordon was earning an associate’s degree from Kankakee Community College, he started working for UPS.

“I worked 13 months on the dock, and then I was afforded the opportunity to start driving right away at age 21,” he said. “So I wrapped up my associate’s degree, and I knew I never would finish college because the opportunity in this career job.

“... That’s why when I chose to give up college and take this for a career, I knew that I would be getting paid more than most people when they graduate. And my main thing was I wanted to build a supportive big family. And this was my ticket. But we work hard.”

And Gordon has done it without a single driving incident. Steve Nelson, Gordon’s supervisor, said the driving record is incredible.

“It doesn’t happen often,” Nelson said. “Usually, if a driver makes 30 years, that’s an accomplishment. For 42 [years] is pretty incredible. And it doesn’t happen just by accident either because he’s in a really busy, congested part of town. So for him to make it that long, it’s a true testament to his driving ability.”

Living in Bourbonnais, raising a family and then working on daily basis in the same community was a great advantage for Gordon.

“It’s really something very special to work in the community all day in which I live in,” he said. “It’s a heck of a perk. You get to know people. My lawyers in town there. My barber is there. I’ve been going to him forever. You know, my bank, my grocery store, just everything is there.”

Gordon said he’s absolutely going to miss the people he interacted with on a daily basis on the job.

“I’m not going to work miss the severe cold,” he admitted. “And the severe heat. That’s how I knew it was time because I didn’t want to be out in that stuff anymore.”

In retirement Gordon will strive to stay active, and he regularly walked approximately 8 or 9 miles a day, going in and out of business, delivering and picking up packages on his route.

“I purchased a new bike at Tern of the Wheel, a really nice Trek bike,” he said. “I like to hike. I like to play tennis. I like to play racquetball. Stock market is my hobby. I’m just going to stay busy. I’ll do some traveling, connect more with my kids.”

Gordon has five grown sons — Adam, Tim, John, Joe and Dan — and five grandkids. He enjoyed all the ball games and activities while his sons grew up in Bourbonnais. He spent a lot of nights at Slater Field in the Bradley-Bourbonnais Little League, coaching his sons.

“My secret is to have faith in all adversity, have a good relationship with God and never give up,” he said. “Never give up.”